profine presented a team at the RTL television donation campaign

An athletic work-out for children in need of help. This was the motto of the "24-hour Bike Challenge" as part of the "Spendenmarathon” (donation marathon) of RTL television in Germany.

profine GmbH also took part with a four-man team and took the challenge against the well-known extreme-sportsman Joey Kelly, from 24th to 25th November 2016.

The task: On a total of 24 spinning bikes, the cyclists of the participating companies took turns alternating around the clock at the RTL headquarters in Cologne. Joey Kelly rode 24 hours straight against the teams.

The aim: With every spinning bike that spun 24 hours, a donation went to the non-profit "Stiftung RTL - Wir helfen Kindern e. V." (RTL - We help children), which patronizes children and young people in need of help in Germany and the world.

World record: Joey Kelly and his company teams have made the world record, generating an average of 90 kilowatt per hour in 24 hours on their spinning bikes and thus producing “the largest amount of energy generated in static cycling in 24 hours with muscle power”.

Together with their partner Porta Fenster and the D&M Rollladentechnik, profine GmbH handed over a donation check for 24,000 Euros. The participation was initiated by Deutsche Fertighaus Holding AG.

On the 24th of November 2016, RTL broadcasted its charity program, moderated by Wolfram Kons, for the 21st time. 7,828,397 Euros were donated to the organizers during this year's event.

For the profine team - Ines Raczinski, Ludwig Schreiner, Dietmar Skupin and Friedhelm van den Berg - it was an unforgettable experience.

"It was a real challenge. But as a team against Joey Kelly and to achieve something for a good cause, that was all the motivation we needed”, says Ludwig Schreiner, sales manager of the system provider profine. 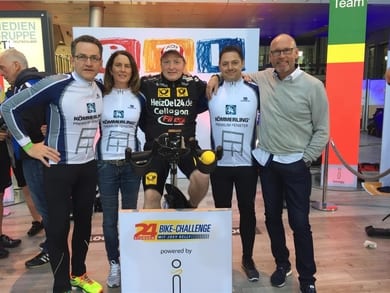